Which of these two graphs below seem more realistic to you? The one that is a straight line? Or the one that zigs and zags in an upward direction? The zig-zag chart is the most realistic because it depicts the market for the last ninety years. In those years, the country was just coming out of World War I, the depression hit, WWII exploded, the technology boomed and crashed, and the financial markets hit a crisis. None of this history would have factored into the thinking of an investor ninety years ago. Yet today, if that same investor had put $1000 (a king’s ransom back in the day) into a market-based fund, (none really existed then), it would be worth nearly $7,000,000 today. This would be the equivalent of taking $100,000 and investing it for a child or grandchild today and waiting until they were ninety years old to access the capital. Few would do this, but… 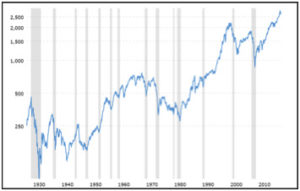 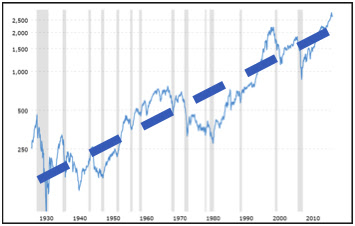 The law of markets is simple – markets go up and markets go down. The years 2016 and 2017 were exceptional years for the market. Most of the growth happened after the 2016 Presidential election. The market grew over 18% during those two years. That being the case, does it seem reasonable 2018 might be a pause?

All the doom-and-gloomers gleefully suggest the major correction they are predicting is in process. If you make the same prediction over and over, eventually you will be correct, but what about the intervening periods? Do they get any discredit for being wrong most of the time?

Essentially, there are two ways to invest. First, you can try to predict where the market is going or second, you can be the market, both of which are a lot like gambling in Las Vegas. Most gamblers know when they enter the city limits, the odds of winning are in favor of the house. But, still they go. Still they try to beat the odds, hoping beyond hope they will be one of the few who win and even break the bank. There are enough stories about the winners to give any inveterate gambler a hope and a dream. But the majority of gamblers end up in the dustbin of losses.

In the same way there are two ways to invest, there are two kinds of investors – speculators and those who are in it for the long run. Speculators believe they can outguess the market. They think they can read the tea leaves and know in advance whether Kim Jung-un is going to play ball with the U.S or do what North Korea has always done — dodge and weave around the agreements. Speculators think they know whether the tariff war is going to happen, or if there will be a stabilization, relieving fears. There is only one problem with being a speculator. All the information they glean and process has already been priced into the market BEFORE they heard it. It is the height of human arrogance for an everyday investor to think they can outmaneuver, outguess, or outsmart the market. Eugene Fama was given the Nobel Prize in Economics and Finance for proving the market processes information instantly and the investor is left behind in the process. The only way to get ahead of the market, is to be the market.

Now, go back to Las Vegas and the gambler’s dilemma. They have no choice but to bet against the house, even though they know the odds are stacked against them. The ideal gambler outcome is to be the house, but that means you would have to be Steve Wynn and own the casino. “Being the market” is equivalent to owning the house. Sure, there may be the one-off, where some man or woman hits the BIG JACKPOT and it excites everyone to keep trying. The same is true of the market. Once in a great while, someone gets lucky and beats the market. But, winning is not the norm. Over the long run, if you want to enjoy long term investment success, you must be the market.

According to Miller, Markowitz, and Sharpe – the first academics acknowledged for their research into market behavior and pricing — an investor can only be the market by having a widely diversified portfolio using low cost funds. These funds must be pure, avoid chasing the return (style drift), and hold positions in all the publicly traded stocks. Warren Buffet said it best. To paraphrase him, you don’t have to have a Mensa IQ, or be a business guru to successfully invest. You only need an intellectual framework that is sensible, robust, pervasive and persistent.

In addition, you need to put an emotional guardrail around your portfolio so you don’t destroy your framework every time the market starts to correct. Jumping in and out of the market is dangerous to your wealth. Markets go up and down. As an investor, you have a choice. You can either try to avoid the downs and just catch the ups, or you can ride it out and understand your profit lies in the recovery. If you have a properly invested portfolio, the downs are more than offset by the recovery. Sometimes the recovery takes a few months, or even years, which can be worrisome and distressing. But, if your time horizon is long, does it really matter? Is a short-term downturn going to impact your long-term outcome? If the answer is yes, then you are probably in the wrong allocation for your risk tolerance. But if you are in it for the long haul, then the best strategy is to ignore the noise and be patient. Wait until the market adjusts and corrects in the opposite direction.

Here is a good example. Over the last ninety years, small-cap stocks have out performed large-cap stocks 57% of the time when using rolling one-year returns. There are 1045 overlapping periods during this time frame. But, if you look at five-year rolling returns, the percentage increases to 64%, and using ten-year rolling returns, the increase is 72%. In other words, the farther out your time line stretches, the more the reward. The problem is that we live in the one-year time frame and we measure success quarterly. In any of the 1045 one-year periods, there is a 43% probability large-cap will beat small-cap. When that happens, it is easy to give up and say the small-cap premium has run its course, it’s over. But is it really over?

A couple of days after the 2016 election, small-cap value stocks took over the market and made up for nearly eighteen months of lower returns. But once the surge was complete, the large caps came back into favor. As an investor, how do you manage this phenomenon? Do you try to outguess it, or do you patiently wait for it to appear again?

As a student of the market, you learn expected return (the historical performance of the market over long time periods) is scientifically accurate to within a 5% probability. In other words, 95% plus of the time, the asset class or market will deliver the expected historical return. This gives investment managers the authority and confidence to build a portfolio based on these expected returns. You have a choice as an individual investor – you can either rely on your gut instincts and go with the noise (which has already been priced into the market), or you can stay the course and trust the science.

One final thought – Eugene Fama says any information limited to a three-to-five-year timeframe is just noise. In other words, you cannot accurately draw any scientific conclusions or do any probability analysis based on returns using a short run. Most academics say you need a minimum of 40-50 data points to draw any conclusions, which is why we use 1970 as our starting point in our Expected Return Analysis (ERA) reports. The long timeframe gives us 47 years of data to develop our modeling and analysis.

Every investor is faced with the same dilemma – blindly guessing or knowing within reason. Investing is binary. You either trust your own intuition and instincts guided by the intuition and instincts of others, or you trust an intellectual framework. After more than fifty years of investing, it is my conclusion that trusting markets is better than trying to guess which are the best stocks. I hope you agree.